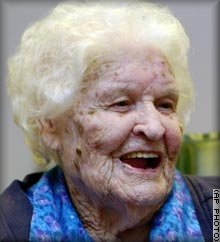 MONTGOMERY, Ala. (AP) -- Alberta Martin, the last widow of a Civil War veteran, died Monday, ending an unlikely ascent from poor sharecropper's daughter to the belle of 21st century Confederate history buffs who paraded her across the South. She was 97.

Martin died at an Enterprise nursing home of complications from a heart attack she suffered May 7, said her caretaker, Dr. Kenneth Chancey. She died just as the nation was celebrating Memorial Day and nearly 140 years after the Civil War ended.

Her May-December marriage to a Civil War veteran in the 1920s and her longevity made her a celebrated final link to the old Confederacy.

After living in obscurity and poverty for most of her life, she spent her final years with the Sons of Confederate Veterans carrying her to conventions and rallies, often with a small Confederate battle flag waving in her hand and her clothes the colors of the rebel banner.

"I don't see nothing wrong with the flag flying," she said frequently.

Gertrude Janeway, the last widow of a Union veteran from the Civil War, died in January 2003 at her home in Tennessee. She was 93 and had married veteran John Janeway when she was 18.

Wayne Flynt, a Southern history expert at Auburn University, said the historical distinctiveness of the South, which is so tied to the Civil War, has been disappearing, but Martin provided people with one last chance to see that history in real life.

"She became a symbol like the Confederate battle flag," he said.

In 1997, Mrs. Martin and Daisy Anderson, whose husband was a slave who ran away and joined the Union Army, were recognized at a special ceremony at Gettysburg, Pa. Mrs. Anderson, who lived in Denver, died in 1998 at age 97. Mrs. Janeway wasn't invited to the Gettysburg event since at the time, no one outside her family knew her whereabouts.

Alberta Stewart Martin was not from the "Gone With the Wind" South of white-columned mansions and hoop skirts. She was born Alberta Stewart to sharecroppers on Dec. 4, 1906, in Danley's Crossroads, a tiny settlement built around a sawmill 70 miles south of Montgomery.

Her mother died when she was 11, and her widowed father eventually moved to Tallassee in central Alabama. At 18, she met a cab driver named Howard Farrow, and they had a son before Farrow died in a car accident in 1926.

Stewart, her father and her son soon moved to Opp to stay with relatives. Just up the road lived William Jasper Martin, a widower born in Macon County, Ga., in 1845. He enjoyed a $50-a.m.onth Confederate veteran's pension and was looking to get remarried.

The cantankerous 81-year-old man struck up a few conversations with the 21-year-old neighbor and a marriage of convenience was born.

"I had this little boy and I needed some help to raise him," Alberta Martin recalled in a 1998 interview.

They were married in a civil ceremony at the courthouse in Andalusia on Dec. 10, 1927, and 10 months later had a son, William.

When asked if she loved her husband, Martin said, "That's a hard question to answer. I cared enough about him to live with him. You know the difference between a young man and an old man."

William Jasper Martin died on July 8, 1931. Two months later, Alberta Martin married her late husband's grandson, Charlie Martin. He died in 1983 and is buried at New Ebenezer Baptist Church six miles west of Elba, where the family had its home.

Under arrangements made years in advance and paid for by Civil War groups, Alberta Martin also is to be interred at the church in an 1860s-style ceremony, following a funeral 1 p.m. June 12 at First Assembly of God Church in Elba.

In her final decade, Chancey, an Enterprise dentist and member of the Sons of Confederate Veterans, carried her to Confederate events across the South and said she loved the attention. "It's like being matriarch of a large family," he said.

At the events, people stood in line to meet her, with everyone wanting to touch her and hold her hand.

"She was a link to the past," Chancey said Monday. "People would get emotional, holding her hand, crying and thinking about their family that suffered greatly in the past."

Sam Webb, a historian at the University of Alabama at Birmingham, said her popularity was no surprise.

"There are a lot of people who still see the Confederacy as part of their identity," he said.

In her final years, she became the focus of a dustup over the depiction of her and her late Confederate husband in the 1998 book "Confederates in the Attic." Among other things, the book by Tony Horwitz described William Jasper Martin as a deserter.

A group that defends Southern heritage and the Confederate battle flag disagreed, contending there were at least two William Martins who served in Company K of the 4th Alabama Infantry Regiment and that Horwitz got the wrong one. Horwitz said his research was carefully checked and the book was accurate.

The state government considered Martin's record clean enough to award him a Confederate pension in 1921 and to give Alberta Martin Confederate widow's benefits in 1996. Chancey had helped her apply and put together the necessary documentation.

She said her husband never talked much about the war, except the harsh times at Petersburg, Va.

"He'd say it was rough, how the trenches were full of water. They were so hungry in Virginia that during the time they were fighting, they had to grab food as they went along. They came across a potato patch and made up some mashed potatoes," she said.