C onfederate Memorial Day. a day set aside in the South to pay tribute to those who served with the Confederate forces during the American Civil War.  The founder of the Federal Memorial Day, Gen. John A. Logan (Commander in Chief of the Grand Army of    the Republic), was so impressed with  the way the South honored their dead with a special day, he became convinced that such a day must be created to honor Union dead. The battlefield graves all around Richmond could be seen "marked with little white flags, faded wreaths of laurel" where family and friends of  Confederate  soldiers had placed them. Logan is reported to have been "deeply touched" and said "it was most fittting; that  the ancients, especially the Greeks, had honored their dead, particularly their heroes, by chaplets of laurel and flowers, and that he intended to issue an order designating a day for decorating the grave of every soldier in this land, and if he could he would have made it a holiday." This of course was done at a later date, thus our National Memorial Day. 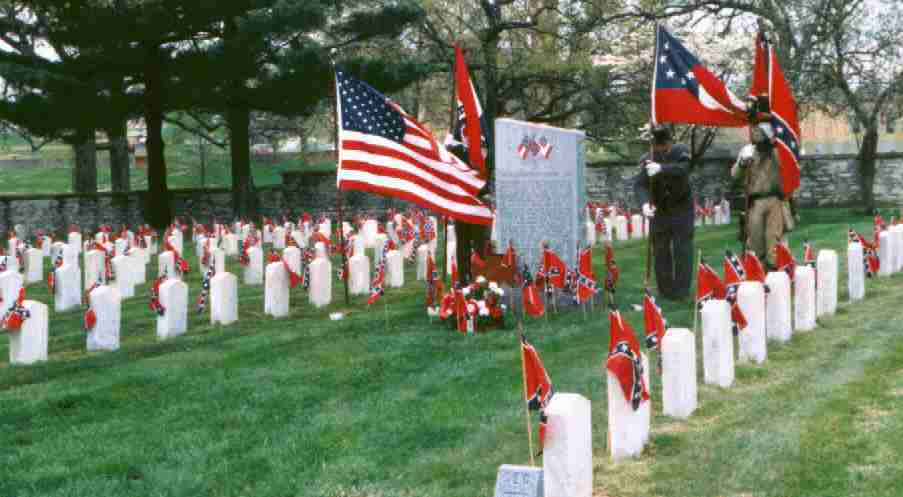 The Confederate Memorial Day is observed on April 26 in Alabama, Florida, Georgia, and Mississippi; on May 10 in North Carolina and South Carolina; on May 30 in Virginia; and on June 3 in Kentucky, Louisiana, and Tennessee.

"For Confederate descendants today, aside from our European and South American compatriots,  our "national identity" is now the United States of America.
While our national flag is the "Stars and Stripes", the flag representing a significant part of our national origin is the "Stars and Bars" and all the rest of the national flags of the Confederacy.
Let them all keep flyin, forever and in peace."
Author unknown